The more you learn about making good coffee at home the more you realize that a proper burr grinder is a must-have. Most of us have probably owned a blade grinder at some point in our lives and realized that the consistency and control of grind size are just not there.

You see a burr grinder works by rotating burrs against each other to grind the coffee between them. The distance between the burrs can be controlled with a lot of precision allowing you to grind the perfect size grinds every time.

This is much more effective than throwing your grinds into a blade grinder and thrashing the blades around until you get what you think is the right size grounds.

Burr grinders can get very expensive, but there are some more budget-friendly ones that get the job done. Probably the two most popular budget automatic burr grinders are the Bodum Bistro and the Capresso Infinity.

Here is our detailed review and comparison of these two grinders.

The burrs rotate at an RPM of 450 which is on the slow side. However, this is a good thing because less heat is produced from the spinning burrs resulting in less of the flavors and coffee oils being extracted from the beans before they are brewed. This also makes the machine quieter.

It’s worth mentioning that the Capresso Infinity has a safety lock feature that prevents the burrs from grinding if the hopper is out of place.

Unlike the Bodum Bistro Burr there is not a simple on/off button. Once the timer is set, the grinder will grind until the timer finishes. However, you can stop it by turning the hopper to the right past the most coarse setting.

Cleaning the Capresso Infinity can be a tad bit difficult due to the fact that it tends to produce static resulting in coffee getting stuck in its crevices. However, like most burrs they have a simple mechanism to remove the top burr for easy cleaning access.

Made with commercial-grade steel burrs with precision cuts for uniform coffee grounds. It has a convenient safety auto-off feature if the hopper is not in place. Engineered with slower spinning burrs that result in less heat production and a quieter grinder.

The Bodum Bistro Burr Grinder has 12 grind settings with stainless steel conical burrs that provide a consistent grind without the need to sharpen them. The burrs are easy to clean with a simple mechanism to remove the hopper and access the steal.

One great feature of this model is a friction clutch that will stop the grinder if there is some kind of non-coffee debris that can damage it.

This machine has a simple push button to control the grinder and a timer so that you can grind the exact amount of coffee you need for whatever you are planning on brewing. This is great for when you figure out the ideal amount of coffee for your brew and you want to replicate that amount consistently.

However, it may not be ideal for large amounts of coffee since the timer limits the grinder to 20 seconds in order to prevent overheating.

The coffee ground catcher is borosilicate glass with a rubber seal on top that does a great job of reducing static and preventing mess.

As far as grind quality goes, this machine does produce very consistent grounds. However, the smallest setting which is supposed to be used for espresso doesn’t produce grinds fine enough for espresso unless you are using a pressurized portafilter.

Made with stainless steel conical burrs provide a consistent grind. Convenient friction clutch prevents damage to grinder from poor quality beans. The grind catcher is made with borosilicate glass with a rubber seal that reduces static and mess. Very easy to clean. 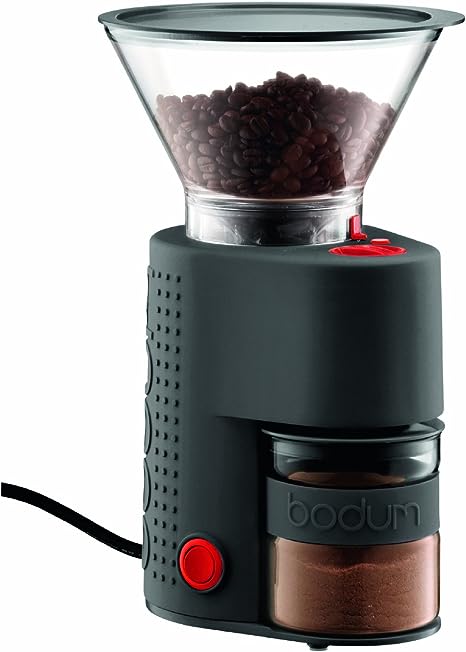 Now we are going to compare these two burr grinders side by side so that you can leave this page confident in your decision!

The Capresso Infinity wins this category since it has 16 settings as opposed to the Bodum Bistro which only has 12. Both grinders clearly indicate a fine to coarse-scale so that you can pinpoint the exact type of grounds you need for your cup of coffee.

The Bodum Bistro Burr spins much faster than the Capresso Infinity.

One important thing to note about grinder speed is that the faster your grinder spins, the more heat it produces. This heat in turn is transferred into the grounds which pre-releases some of the aromatic qualities of the coffee grounds.

So faster is not necessarily better!

The Bodum Bistro Burr does produce higher quality grounds which are more uniform than the Capresso, especially at the coarser setting. Although the difference is very minor. Both grinders will produce grounds that are much more consistent than a blade grinder.

The Capresso Infinity does have a plastic catch tray which is not as nice as the Bodum Bistro’s borosilicate glass catcher. However, the Capresso still tends to be less staticky due to the slower RPM speed of the grinder.

The Capresso’s tray holds 4 oz (or 113 grams) of ground coffee. We don’t know exactly how much the Bodum’s tray holds, that information doesn’t seem to exist even in their extensive manual. However, we can confidently say that it holds more.

Both burr grinders have pre-set timers so that you can consistently brew the same amount of coffee that is needed. The Bodum Bistro has a simple on/off button which is convenient if you need to quickly stop the machine.

The Capresso Infinity has an auto-off feature when the bean container is not locked so that you don’t have to worry about the machine being on when you are cleaning or adding beans.

The Bodum has a convenient friction clutch that prevents damage to the burrs if something that isn’t coffee ends up in the grinder!

Both burr grinders have high quality steel burrs that you can expect to last you years and years.

The housing for the Capresso Infinity is made of ABS plastic which isn’t the most durable stuff on the market. However, that is what you would expect with a budget grinder. The Bodum Bistro is made with special plastic that is scratch-resistant. Similar to the Capresso’s build.

Both units are very small and compact. But yes, technically the Capresso infinity is slightly smaller if we are being picky!

The Capresso Infinity is quieter, rotating at only 450 RPM.

The Bodum Bistro wins this category due to less grind retention. The glass ground catcher combined with a set of plastic spokes that keeps your beans flowing uniformity through the burrs reduces static build-up. Ground retention is worse when you have a more sticky environment.

Both units make it easy for you to remove the top burr and thoroughly clean them.

Both burr grinders have a timer setting that lets you produce a consistent amount of coffee grounds every time. The Capresso has a 5 second to 60-second timer but the Bodum Bistro is limited to 20 seconds in order to prevent overheating.

This is due to the fact that the Bodum spins faster resulting in more heat production.

Should You Purchase The Capresso Infinity Or The Bodum Bistro Burr Grinder?

For the price, you really can’t go wrong with either one of these entry-level burr grinders. Both the Bodum Bistro and the Capresso Infinity are great options for the home brewer.

Our choice is the Capresso Infinity for one major reason: the burrs spin slower. This produces less heat than the Bodum Bistro which means you aren’t losing as much of those aromatic flavors from the grounds.

How much does this actually affect the flavor of your coffee? Probably not that much, but it does something.

If this is not as much of a concern to you as it is to me, then the Bodum Bistro is still a great choice! The glass ground catcher is much better than the Capresso’s plastic catcher. The Bodum also requires less cleaning which could lead to it lasting longer.

Regardless of what you choose, we are glad you are going with a burr grinder instead of a blade grinder!

Made with commercial-grade steel burrs with precision cuts for uniform coffee grounds. It has a convenient safety auto-off feature if the hopper is not in place. Engineered with slower spinning burrs that result in less heat production and a quieter grinder.